Emerald is a variety of the mineral Beryl which has the chemical formula of Be3Al2(SiO3)6 (beryllium aluminium cyclosilicate). Pure Beryl is colorless and but this stoneÂ gets its beautiful green color from the touch of impurities of chromium (or less frequently vanadium) in its molecular structure.This spell binding stone has besotted human beings for hundreds of years and a great number of people have been smitten by its magical charm.

Green is the color of nature which lives and breathes through the green leaves, and the green grass in the surging meadows. Green is also the color of our gemstone emerald. In fact emerald is the only gemstone to have a color named after itself ’emerald green’.

The name Emerald stems from the Greek word smaragdos through the old French Esmeralde, which just means ‘Green Gemstone’. 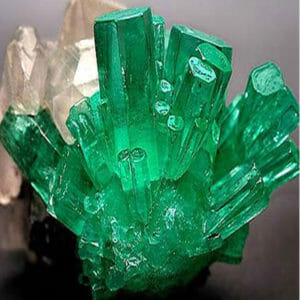 Emerald has been known to mankind and treasured as a gemstone since ancient times when they were found only in Egypt. The Egyptians from the time of Cleopatra excavated it under the blistering desert heat and fear of poisonous snakes and scorpions. But close to the year 1492 onwards they began to turn up from other regions of the world.

Today they are mined almost all over the globe in Brazil, Pakistan, Zimbabwe, Zambia, Russia and Columbia. The best stones come from Columbia but the most valuable emeralds came from Rajasthan region of India in the 16th century. All the important jewelry makers like Cartier, Bvlgari and other obtain much of their emeralds from India.

Akin to all gemstones, the attributes which determine the quality of an emerald and its worth are Color, Clarity, Cut and Carat weight.

Its color establishes the quality of an emerald far more than anything else.

Quality emeralds are deep rich grassy green and effervescent in color while lesser emeralds are paler and less brilliant. There are additional elements within the color factor which have to be given consideration like the hue of the stone including tints other than green; the tone of the color ranging from dark to light shade; and saturation meaning the purity of the color and the level of the mixed secondary hues. Yellow and blue, the hues found adjacent to green on the spectral color wheel, are the typical secondary hues seen in emerald.

The same massive geological forces and pressures that aid the formation of emeralds also lead to fissures and inclusions in the gemstone, and pretty much all Emeralds come with inclusions and fissures. It is incredibly rare to come across an emerald that is entirely clear and such a gemstone commands a heavy premium. At the same time a completely clear stone makes it suspect of being a man-made one.

Unlike diamonds which are scrutinized under ten times magnification to locate inclusions, an eye clean emerald with inclusions not visible to the naked eye is considered flawless. But connoisseurs prefer emeralds with at least a few inclusions as an evidence of their authenticity.

A few inclusions are expected and do not detract from the value of the stone as much as with other gemstones and emerald ranks among the top precious gemstones of the world in spite of the flaws and inclusions.

However, you should make sure that fissures do not go too deep into the stone weakening it and making it prone to splitting.

These stonesÂ are usually treated by plunging them in colorless oil or resin to fill up its fissures and greatly enhance its clarity and durability. It is an accepted practice in gem trade as long as it is openly declared.

An Emerald should be well cut to give it the optimum glow and sparkle though the cut is not as important in case of an emerald as with other gemstones since the emerald is mostly valued on the basis of its color. Moreover, an emerald is usually too included to sparkle.

However, it is still imperative to know the difference between a good and a bad cut to be able to make an educated choice.

In a well cut gemÂ you should not be able to look though the stone but rather the light should be reflected back at you. You should keep away from emeralds with uneven facets. Turn the emerald around, and verify that each facet reflects light like a well polished mirror with no rough or dull blemishes.

Due to the natural inclusions, cutting this gemstoneÂ is a difficult task for every craftsman. The shape “emerald cut” which is popular now for diamonds as well as other gemstones was in reality originally designed for emerald. It is a rectangular or square cut with cut corners. The facets are broad with flat planes resembling the steps of a stair. This cut brings out the magnificence of this valuable gemstone to the best possible and at the same time safeguards it during an unintentional impact.

The cabochon cut is another type of gemstone cut given commonly to emeralds. Its relative crystal non-uniformity makes emeralds more likely than other gemstones to be cut into cabochons, rather than faceted shapes.

Emeralds of big carat size are very rare making the larger carat size stones very high-priced. Price changes drastically with slight variation in weight which is why emeralds are limited to few standard shapes. The volume lost in cutting would lead to loss of value.

A very rare type of this stoneÂ known as the ‘Trapiche Emerald’ set apart by star-shaped rays originating from its center in a hexagonal pattern is found only in the Muzo mining district of Colombia. The phenomenon is caused by black carbon impurities that happen to form in the same star shaped pattern.

Man made emeralds are also produced today by simulating the atmospheric conditions conducive to formation of emerald in a lab with certain elements.

Don’t clean your gemstoneÂ either with hot soapy water or steam or in an ultrasonic cleaner because the oil or resin used in treatment could be removed or broken, making fissures more noticeable. Luckily, it is possible to have emeralds re-oiled. Emeralds are durable gemstones with a hardness of 7.5 to 8. Nevertheless, emeralds should generally be treated with care and protected from accidental clashing with other objects.

Use a tender brush and a very mild dish soap to clean your emerald.

Cleopatra’s love for emerald was legendary. Mummies in ancient Egypt were frequently buried with an emerald on their necks, the flourishing green a symbol of eternal youth. The Mogul emperors of India, including Shah Jahan who built The Taj Mahal, fancied emeralds so much they inscribed them with sacred text and wore them as lucky charms. Another mogul emperor Jahangir owned a drinking cup carved out of emerald.